Ben knows how to play the money & politics game Money talks, big money talks louder. The political spectrum, Democrats and Republicans know — money is the name of the game. With US Supreme Court enabling decisions — Buckley v. Valeo, Citizens United v. FEC, McCutcheon v. FEC — the game rules are set and the game is on.

Billions of dollars flow every two- and four-year election cycles. Elections swing as money rolls in and money expects ROI, a return on investment. The public sees the deal and the public chose, in 2016, a candidate who loudly professed he was not part of Washington DC’s business-as-usual — that due to his wealth he was not and wouldn’t be the tool of special interests and big money. Donald Trump claimed his own money made him ‘independent’ of special interests and influence buying, unlike his opponent whom he attacked as “crooked” for connections to wealthy contributors and interests.

The tables quickly turned after the elections as promises made to “clean up the swamp” in Washington DC became promises not kept. The promises not kept continue on. Beginning with its first appointments and decisions, budgeting and policies, the new US administration has taken on the character of powerful lobbying groups. The most powerful lobbying groups, oil/gas and defense industry are racing to the top of the administrations priorities.

In its first months in office the new administration has brought unprecedented money into politics, a cast of millionaires, agency heads drawn directly from lobbying interests and campaign financial contributors.

Lobbying has become an immense business over the past several decades with estimates of over 100 thousand lobbyists focused on Washington DC politics. And through groups like the American Legislative Exchange Council, big money provides model legislation for each state government, a pay-to-play ‘federalism’ at work.

Both campaigns found deep support in their core messages that call for a change in pay-to-play politics.

The political establishment, both the Democratic and Republican parties, vigorously object to ‘disarming’ themselves by pushing back the money that powers the political system. Yet, it is clearly time for both major US political parties to get off the ‘juice’, paraphrasing the famous California politician, Jesse Unrah.

There is a point beyond which the buying of access and influence crosses the line and become improper and illegitimate.

Laws and codes of ethics regulating conflict-of-interest are not as strong and clear as they should be — and need to be. A ‘makeover’ is needed now.  A profound democratic change that respects a balance in politics between the public voice and the monied voice of lobbyists.

It is time, overdue time, bell-ringing, siren sounding time for governing change, the ‘cleaning up’ of a system of fund-raising and barter that is neither dignified or in the best interest of the American people.

A typical Congressperson allocates HALF of every day calling and taking meeting for $$… This is near obscene on its face. Representatives of the American people should attend to the People’s business, not allocate more than half of every day, on average, dialing-for-dollars and attempting to raise funding for their party and/or the next campaign.

Buying elections to influence policy shouldn’t be the goal.

Then the Supreme Court of the US invalidated “aggregate contribution limits” in its McCutcheon v. FEC decision.

Political cartoonists are seeing the political reality without illusion. 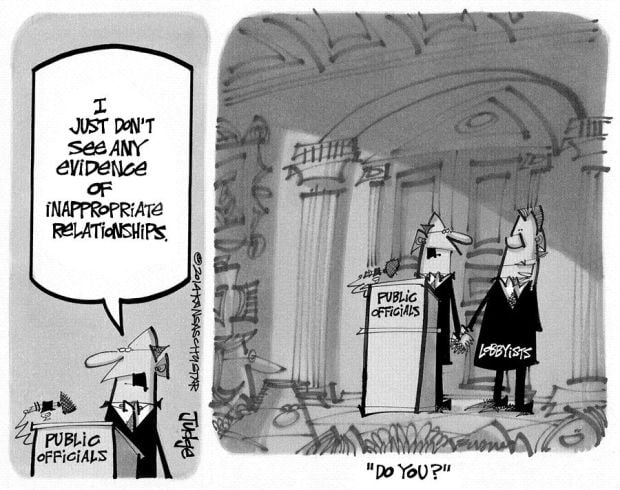